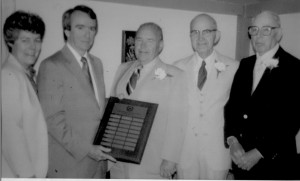 A group of public-spirited citizens saw a need in their community for a permanent organization that would provide funds to help Wakefield young people meet the soaring costs of higher education. In 1959, the late Catherine E. Simpson called to the attention of the late attorney William J. Lee a newspaper article describing “The Fall River Plan,” a scholarship program originated by Dr. Irving A. Fradkin, a Fall River optometrist. Mr. Lee, in turn, showed the article to Town Accountant John J. McCarthy, then president of the Wakefield Chamber of Commerce. Together Mr. Lee and Mr. McCarthy journeyed to Fall River to learn first hand about Dr. Fradkin’s plan.

Their visit resulted in the first plans for the sponsorship of a scholarship fund in Wakefield. Town officials and civic leaders helped develop the plans. Superintendent of Schools John B. Hendershot spent a day in Fall River with Dr. Fradkin learning from him the details of how his plan operated. Initial funding came from the presentation of an original musical comedy presented by the Chamber of Commerce in January, 1960. The show raised $3,700 for the fledgling scholarship fund. 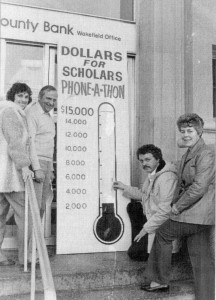 From its inception, CSF of Wakefield encouraged the establishment of individual endowment funds providing income annually for scholarships. Today TSF of Wakefield (re-named in 2013) has over 500 such funds and a total endowment of these permanently restricted funds valued at $11 million dollars. In addition, unrestricted donations to the General Fund are also awarded in their entirety as scholarships. In 2017, we were able to appropriate $545,000 for scholarships.

Over the years, the criteria for awarding scholarships has evolved. Initially, financial need as well as scholastic ability, extracurricular activities, community participation and similar considerations were part of the determination of recipients. Those first criteria were changed to financial need and placement in the upper half of one’s graduating class. Eventually, the scholastic requirement was removed altogether, with acceptance at and continued attendance at a post-secondary institution considered sufficient merit.

TSF of Wakefield has three endowment funds that provide income for scholarships awarded strictly on the basis of academic achievement. The Boston College Academic Achievement Award established in 1983 by an anonymous donor for Wakefield High School students attending Boston College. The Bill Spaulding Merit Award Fund for graduating high school seniors established in 1987 from capital gains earned on investments.  The Dan Blanchard Award is made to a graduating senior at Wakefield High School who has excelled in Social Studies (History) and has shown an interest in athletics.  The Rhudine Johnson Award is given to two graduating Wakefield High School students (one male and one female) who are deemed “unsung heroes” of their graduating class as chosen by their classmates. The Wakefield Adult Mentoring (WAM) Incentive Award Program is a financial award offered to any student who participates in WAM for at least three years and graduates from an accredited high school. Students can use the funds for post-secondary education or job training programs.

CSF of Wakefield celebrates its 25th Anniversary on September 14, 1985

For many years, most of our awards were made only to high school seniors. As our endowment grew, we were able to assist returning college students, and today we provide need-based scholarship support to any resident of Wakefield who is a full-time student and who has financial need. This includes high school seniors, returning undergraduates, postgraduate students, and continuing education adults who have been out of high school for a number of years.

As our endowment expanded, our contributor list expanded, and our award recipients increased, CSF of Wakefield outgrew its officers’ living and dining rooms. In 1985, we moved into an office in the historic Americal Civic Center in downtown Wakefield with a phone, donated office furniture, a donated computer, and staffed by volunteers. In 1988, we hired a part-time employee. Today the office is managed by a full time employee.

In 2013, CSF made the decision to un-affiliate from Scholarship America’s Dollars for Scholars Program. The new name adopted is The Scholarship Foundation of Wakefield, Inc. (TSF of Wakefield). 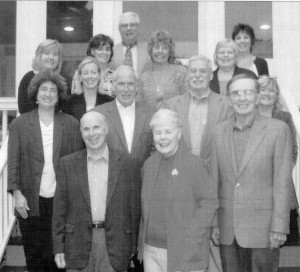