WAM was founded in 2001 by Eldridge and his wife, Merry, as an all volunteer run program with about 15 volunteers, mentoring one-on-one middle school students.  Since then, the program has grown to more than 60 students meeting once a week with their mentors in all Wakefield schools, including the Northeast Vocational School.

Current WAM mentor/mentees matches will be offered the opportunity to transition formally to Big Brothers Big Sisters, and The Scholarship Foundation of Wakefield will continue to offer a financial incentive provided to graduating students who have participated in the WAM program for at least three years and who are committed to pursue a post-secondary education/training.  Additionally, Big Brothers Big Sisters will seek to enroll more youth in Wakefield through referrals from the schools, parents and community agencies, while also working to recruit new mentors from across the community.

Being mentored is about being made to feel special, getting a bit more positive attention, putting a smile on a face that is normally frowning. Being a mentor is also about being made to feel special! Anyone interested in making a difference in the life of a child is encouraged to contact Big Brothers Big Sisters of Massachusetts Bay bbbsmb.org.  If you are interested in having your child be mentored, please contact your child’s school principal.

Wakefield Adult Mentors (WAM), under the auspices of The Scholarship Foundation of Wakefield, Inc., was a community based mentoring program, spearheaded by Robert Eldridge, a member of our Board of Directors and a former President of CSF. WAM was founded in 2001 with about fifteen volunteers, mentoring one-on-one middle school students. Since then, the program had grown to over sixty students meeting once a week with their mentors in all Wakefield schools (K-12), including the Northeast Vocational School.

On of WAM’s primary goals is to encourage students “on the verge of success” to stay in school. The WAM Incentive Award Program is a financial award offered to any student who participated in WAM for at least three years and graduated from an accredited high school. Students can use the funds for post-secondary education or job training programs.

Bob Eldridge, (and other members of the Board of Directors), have long had an interest in developing a mentoring program here in Wakefield. Their interest stemmed from helping out a Norwalk, Connecticut chapter of Dollars for Scholars with the implementation of the first mentoring program affiliated with Dollars for Scholars. This occurred in the 1986. It was at this time that Bob met Dr. Susan Weinberger, founder of the first one-on-one student mentoring program in the United States and who was associated with the Citizens’ Scholarship Foundation of America. At the November 2001 Annual Meeting of the CSF, Bob presented his idea to begin a mentoring program in Wakefield. His idea was enthusiastically embraced.

In January, Bob connected with Susan Weinberger again, telling her of his renewed hope for the program in Wakefield. Susan agreed to conduct a mentor-training program for free, which saved the fledgling WAM program hundreds of dollars.

By the winter of 2001, Bob had begun soliciting help and support from groups and organizations in our community that work with and have an interest in our young people. A core group of individuals from CSF joined Bob in this pursuit and were ready to invite interested community members to learn about the program and participate in its formation. Bob’s initial meetings included conversations with Chief Stephen Doherty of the Wakefield Police Department, Chief David Parr of the Wakefield Fire Department, Terrance Holmes, Superintendent of Schools and Dr. Paula Mullen, Principal of the Galvin Middle School. All of them strongly supported the idea.

One of the first public meetings was held in May of 2002. At that point, WAM’s fondest hopes were to seek a few organizations or individuals who might have an interest in participating, either by becoming a mentor, supplying mentors through a business or organization, or through other forms of support for the program with the hope of having a start-up program in place by the fall. Mailings went out to local organizations and Bob also appeared before the Rotary Club and the Wakefield Clergy Association in hopes of garnering support and funding. The support was plentiful but so far, no one has stepped forward with monetary support.

The final hurdle was reached when next Bob met with William Chetwynd, former Chairman of the School Committee, Terry Holmes, and Peter DeRoeve, WHS Business Manager, to get their approval. As circumstances would have it, the School Committee, in their long-range planning, actually had the concept of a mentoring program on their list of programs they wished to bring forth. Eventually, Bob presented the proposal to the entire School Committee and the program won unanimous approval. One of the trickiest issues, insurance and legal liability, were resolved with the help of Peter DeRoeve and Town Counsel Tom Mullen. WAM could operate under the auspices of the Wakefield School Department. Mentoring would take place on the grounds of the Galvin Middle School and, with the approval of Susan Gilley, Director of the Wakefield Public Library, also under supervision at the library during non-school hours.

Bob Eldridge also met with Melanie Ladd, Community Resource Director of the York, Maine Middle School where their program, SHIPS (Special Helpers in Public Schools) has been in existence for 11 years and has helped hundreds of students. Both WAM and SHIPS are based on the same program formulated by Dr. Weinberger.

By September there was enough interest in the program to hold a “Meet the Mentors” meeting and the public announcement of the new acronym for the mentoring group program’s name WAM which stands for “Wakefield Adult Mentors”. He also reviewed a WHS survey showing a sizeable increase in the last two years in drinking, marijuana use, and suicide attempts among the student body. It is hoped that early mentoring intervention can have a positive impact on these very critical problems. He presented a few facts about the current student population, the details of which came from a Wakefield High School survey of students in 2000 and in 2002:

In addition, Bob shared the following facts from a 1995 Impact Survey conducted by the Big Brothers of America Organization showed that young people with mentors are:

Additional data from a 1989 Louis Harris Poll showed that 73% of students said their mentors helped raise their goals and expectations and 59% of mentored students improved their grades.

Brenda DeNinno, a Guidance Counselor at the Galvin Middle School is the coordinator for this program. Brenda created a mentor’s handbook that will be used as a reference tool for mentors. At the meeting, Brenda also described the unmet need that she and fellow educators see every day. Kids that long for an adult who can and will take the time to listen, show they care, and become a trusted friend. Also present at the meeting, Diane Lind, a long-time teacher in Wakefield, CSF Board member, and WAM volunteer, talked about some of her experiences as a teacher. She explained that with over a hundred students to teach, it was just not possible to give the time and support to some students who could really have used a mentor.

A single mother who also signed up to be a mentor gave testimony of how mentoring helped her son by filling the void left by an often unavailable father. By the end of this meeting, there were a total of sixteen mentors signed up. Bob then gave a short presentation at a Galvin faculty meeting. The assembled teachers were told how to recommend students for the program. By the following day, Brenda had 12 completed recommendation forms on her desk. Eventually, an additional 8 more would arrive.

This program was geared towards students who we like to think of as being on the verge of success. Maybe they are shy and lack social skills, possibly they are unmotivated, maybe they struggle academically, and maybe parents are absent from the home leaving the child feeling lonely and isolated with no caring adults to listen to them. These are children who are most at risk, who are on the proverbial fence and whose lives can go either way. By providing mentors to these children, we hope to expose them to a caring adult who will take the time to listen and honestly communicate with the child. Goals will be simple, realistic and obtainable so that the child can feel some level of success in a world too often filled with disappointments. 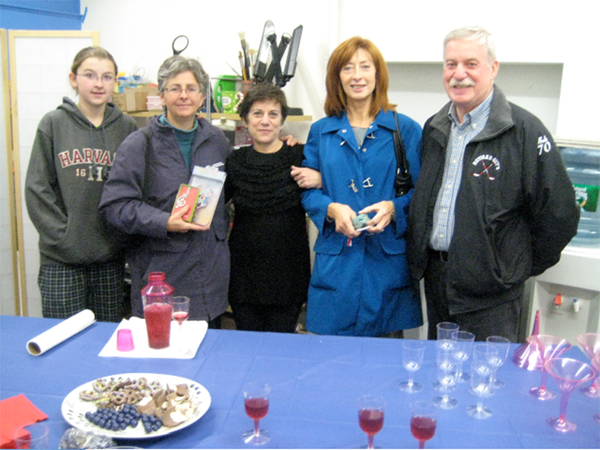 By mid-November 2002 we had in excess of twenty, very excited mentors in place at the Galvin Middle School who are working directly with students. All mentors have had CORI background checks, personal references checks and have been trained. In addition, the parents of students that were recommended to WAM were sent letters informing them of this program and asking for their consent to allow their child to meet with a mentor. It was our hope to have 100 mentors throughout the entire Wakefield school system in the next 3-5 years.

Although WAM was working as a part of The Scholarship Foundation of Wakefield, there are no funds budgeted for this program. TSF does not currently have a source to fund new administrative expenses. All monies received through TSF go directly to scholarships. WAM was the recipient of a $600 donation of which, $100 has already been used to pay for expenses related to the mentor training. The Wakefield Item Press donated the printing costs for our initial supply of training materials. We anticipated future expenses for materials and such, and we also hope to pay for occasional breakfast meetings or pizza party for the students and mentors. We welcomed all forms of financial support towards our goals. Corporate and business sponsors were especially welcome to contribute either financially or by making this exceptional volunteer opportunity available to your employees.

Being mentored is about being made to feel special, getting a bit more positive attention, putting a smile on a face that is normally frowning. Being a mentor is also about being made to feel special! Anyone interested in making a difference in the life of a child is encouraged to contact Big Brothers Big Sisters of Massachusetts Bay bbbsmb.org . If you are interested in having your child be mentored, please contact your child’s school principal.